This past week, I made a trip up to my mother’s home. From the highway, before the I turned onto the driveway and pulled up the hillside, I saw my father’s white truck. It was parked up past the house, near the gate that leads into the pasture. He often parked his white Ford F150 there.

Before I know what was happening, I felt my heart skipped a beat, as a half-formed thought bounced around in my head.

And then, like a deflating balloon, I remembered. Dad’s not here. My father is gone. I won’t see him on this side of heaven again.

I suppose the tears have been building all month. June is the month for celebrating fathers. This year, I don’t have a dad to celebrate. I’m thankful we aren’t a TV watching family. I didn’t need any sentimental commercials to add to the emotions I’m already feeling.

The past few days I’ve had these traces of conversations in my head, as I imagined the two of us chatting in the living room of his home. There is so much to tell him, it would take several cups of coffee to catch him up on all that has happened in the past nine months!

Let’s see … I’d have to share about how Joel had major surgery and shocked us all with his miraculously quick recovery. Of course, there’s all the adventures of life with our foster kids (who we only had for five days when Dad passed away). I would also have to share the saga of the renter leaving my house in such a terrible state, and then how we managed to fix it all up. Of course, Dad would never believe how much Nathan has grown in a short period of time … going from a 140 lb, 5’4″ to 185 lbs, 5’8″.  The amount of clothes I’ve had to buy for him is ridiculous.

I’d talk to him about how parenting teens is harder than I ever imagined and apologize for every time I ever rolled my eyes at him. He would agree that teens are hard people to love, and that I indeed deserve ever eye roll or exasperated huff I get from my five teens.

I’d have to tell him what an amazing dad he truly was … how I loved having him for my father. He wasn’t perfect, but he had so very many things right. He loved God, my mother and his children in the right order. He lived his faith at home and work, not just at church on Sunday mornings.

My dad was so funny. I liked to send him puns and tell him silly jokes, just because I wanted to hear his laugh. He really did have a great laugh. If I had an hour to sit and talk with him, I’d want to tell him at least one joke just so I could hear him laugh again.

I could go on and on. Actually, for several days, I have had these running conversations with Dad going on in the back of my brain. (I’m sure admitting that makes me seem as if I have some sort of mental issue. Hopefully though, I don’t … at least not yet.)

Eventually, I came to the end of my chatter. To my surprise, I found I didn’t have anything left to say. But I didn’t want the conversation (as one-sided as it was) to come to an end. And there, in the quiet, my brain asked a question I wasn’t expecting:

So, Dad … what about you? Tell me everything from the past nine months.

That’s when it hit me like a ton of bricks. My dad’s been face-to-face with Jesus, worshipping at the feet of the King of Kings. What would he have to tell me???  Oh, I can only imagine!

What would he say? I’ve thought about that a little bit as well. I don’t know, but maybe he would tell me not to worry or to be afraid. After all, he knows I have a tendency to feel both worried and afraid quite a bit. Anxiety is definitely my typical mode of operation.

Perhaps he would remind me to be fully surrendered to the love and care of God, who watches over sparrows and clothes the lilies of the field. God has got whatever is going on in my life. All I need to do is simply trust that His plans for me are good.

And I know that my dad would tell me that I should hang onto my faith because in the end it’s all going to be worth it. Forever with God is amazing. 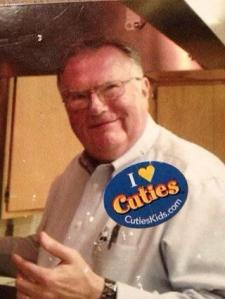 It’s my first Father’s Day without my Dad. I’m missing him terribly … but I’m grateful that I am not fatherless. Not only was I given the blessing of being raised by an amazing earthly father, I am also a part of God’s family. I have a Heavenly Father who watches over me, guides me and is ever leading me closer to Him.

And someday, I’ll celebrate with my Daddy around the throne of the Heavenly Father. What a Father’s Day that will be!

See what kind of love the Father has given to us, that we should be called children of God; and so we are.   ~ 1 John 3:1

2 thoughts on “Father’s Day … without a Dad”