I grew up attending a Southern Baptist church in rural north Louisiana.

My family attended the First Baptist Church, which was the biggest Baptist church in our tiny town. The population was barely 500 people, yet there were at least four other Baptist churches in the area: Bird’s Creek Baptist, Kidron Baptist, Wallace Ridge Baptist, Pisgah Baptist.

It seemed like everyone I knew was also a Southern Baptist.

As an elementary school child, I never really understood the difference between Pentecostal and Baptist beliefs  … that is, other than the obvious one. Pentecostal women wore long dresses, had long hair and never wore jewelry or make-up; the men always wore long pants and long sleeves shirts, even in the middle of the hot, humid Louisiana summers. Oh, and Pentecostals believed in raising hands, speaking in tongues and other mysteries I never could quite wrap my childish brain around.

Still, I understood that at its core, Baptists and Pentecostals weren’t all that different. We believed in the same Jesus. We just expressed it differently.

But Catholics … well, that was a different story. I really didn’t understand what Catholics believed.

I had only one Catholic friend growing up.

Somehow we never did talk religion with each other. She moved away in the sixth grade.  I never did have another close friendship with a Catholic until after my 30th birthday.

Catholicism baffled me. Somehow, even though we talked about the same Jesus and read the same Bible stories, our religions were so different that it felt like we didn’t worship same God at all.   To me it was this huge mystery, too sacred to touch, too frightening to ask questions about.  Yet, more than anything else, I wanted to unravel it to discover everything that was hidden underneath.

Growing up, all I knew about Catholics were that they went to Mass and not church. They prayed to God and Jesus, but also to Mary and the saints. There was this mystery called Confession. And then there were all the different sorts of clergy: fathers, priests, nuns, cardinals, bishops, and the Pope who ruled over them all. 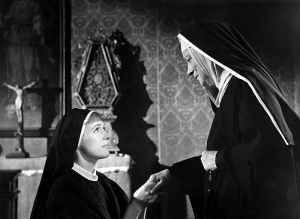 Much of my understanding of the Catholic faith came from the musical The Sound of Music. Oh, how I loved that movie! It came on TV at least once every year, back in those days before VCR’s and DVD players.

I was always fascinated by the main character Maria, who desperately wanted to love God enough to be a nun, but couldn’t manage to keep all the rules.  I identified with that longing, so much so that I often pretended that I would grow up to be a nun … even though deep down I knew good Baptist girls didn’t become nuns.

A little over four years ago, I married my husband Jon and moved to his home in the middle of Cajun Country. If you know anything about Cajuns, you know that they are all Catholics. In fact, their religious beliefs is the very reason they were exiled to Louisiana in the first place.

The city of Lafayette has always been home to Jon. Like me, he grew up a good Baptist, our childhood faith stories mirroring each other’s almost perfectly. However, he lived in the shadow of the Catholic church, part of the Protestant religious minority. As a result, his understanding of Catholicism was much better than mine.

We had only been married a matter of days when Mardi Gras season officially kicked off. My previous Mardi Gras knowledge was very limited … essentially parades, beads and King cake. I also knew that it would all culminate on Fat Tuesday, or Mardi Gras day itself.

Jon had already spent most of that winter in and out of the hospital, literally fighting for his very life.  As the Mardi Gras season came to a dramatic close, Jon was back in the hospital. All day on that Fat Tuesday, the nurses bustled in and out of his room, beads and baubles around their necks.

“You missin’ the parades this year, Sha?” they playfully teased Jon.

I could tell that Jon was happy to be away from all of the Mardi Gras madness, but I grumbled because I was missing out on my first real Mardi Gras in Cajun Country. All I wanted was a chance to experience it for myself, to unravel a little more of the mystery.

But Jon wasn’t sympathetic to my desires.

“Paige, it’s just a bunch of people in costumes throwing out cheap beads. Trust me, the most you are missing is catching a couple of plastic cups … and if we are needing more cups, then you can just go buy some.”

So, I spent my first Mardi Gras in Cajun Country sitting in a hospital room, trying to be content to watch re-run episodes of Swamp People on the History Channel.

The next day was Ash Wednesday. Instead of being greeted by giddy nurses wearing beads, this morning everyone who walked into the hospital room seemed much more somber. The lively spirit from the day before was completely gone.

I questioned Jon about it.

“It’s Ash Wednesday,” he responded. “The party is over. Now it is time to repent.”

Late in the morning, my friend Catherine stopped by the hospital to check in on us. At the encouragement of my husband, Catherine decided to whisk me away for a few hours. Lunch, window shopping, but mostly time with a good friend were sure to cure my sagging spirits.

As we walked down one of the long passageways on our way out of the hospital, we passed by the chapel, where an Ash Wednesday service was just about to start. The next thing I knew, Catherine and I were seated inside.

And when we got up to leave, we both had an ash cross marked upon our foreheads.

It was well-after 1 pm by the time Catherine and I walked into a little sandwich shop for lunch.  The lunch crowd has mostly left, and there weren’t but just a couple of other customers. As Catherine and I approached the counter to place our orders, the man behind the counter (who was clearly a Cajun) commented on our ash crosses. He went to great lengths to assure us that he was going to an afternoon service later in the day to get his ash cross as well. Soon, he was peppering us with questions about our plans for Lent.

Catherine, who had grown up Catholic though now practiced a Protestant faith, chatted easily with this friendly man, while I stood by silently, feeling like a mute impostor of sorts.

My mind raced frantically. What was I doing? Did this even represent my personal religious beliefs? I’m a Baptist, for crying out loud.  Good Baptists don’t put ashes on their foreheads. I’m nothing more than a pretender!

Throughout the rest of the afternoon, those ashes burned against the skin along my forehead.

Several hours later, I walked back into the hospital room. Jon looked up at me and raised his eyebrows quizzically. “I see that you went and got yourself some ashes.”

I hung my head, not really sure how to respond.

Jon grinned. “It’s okay, Paige. There is nothing wrong with putting ashes on your forehead. In fact, it represents a beautiful truth. Without God and His forgiveness, our lives are nothing more than heaps of ashes. But, when we give our hearts and the ashes of our lives to Jesus … well, He takes that and turns it into something beautiful for His glory. Wearing ashes on your forehead is just an outward symbol of your belief in Jesus, and not something to be ashamed of at all!”

Four years later, I can laugh about my first Ash Wednesday.

Since that day, I’ve made more than a few Catholic friends here in Cajun Country. I’ve discovered more about their beliefs, comparing them to my own.  I’ve come to the understanding that we do, in fact, follow the same Jesus, proclaim the same Savior, desire to know the same God. Our expression of faith might be vastly different, but the basis of our faith is the same.

I’ve also learned to treasure Lent, something that my Baptist faith never taught me to do. What a blessing it is to spend forty days focusing my attention on intentionally living my life so that I grow closer in my relationship with Christ!  Easter means so much more after this period of sacrificing and fasting and preparing my heart for the glory of Resurrection Sunday. It’s a worthwhile practice and I’m blessed each time I diligently consider how I might spend Lent seeking God.

Today is Ash Wednesday. While I won’t go get ashes smeared into the shape of a cross on my forehead, I will spend the next 40 days seeking God a bit more diligently. I am grateful to my Catholic friends who taught me how.

After all, even a good Baptist girl can celebrate Ash Wednesday.